Shop-et-al 11k 7y April 27, 2021 08:17PM
My, how quickly people forget here! In their willingness to wipe a previous president out of sight and out of mind, some people might have lost their minds! When Trump was POTUS, a similarly expensive infrastructure bill had passed the House with an added amount! Now, is this really approval for Biden, or is it more that some people would like to mold our view into believing that there was no support for Trump and his proposed infrastructure funding or even that Trump never happened and only Biden has done something for infrastructure?

There should be a continuity editor who will sort and tame the tangled narratives of the historical record for the benefit of the masses. I wonder if this concept would gain approval in both houses of Congress and escape presidential veto. Hmmmm.....

_____
I’ve noticed that everyone who is for abortion has already been born. - Ronald Reagan
_____

@Shop-et-al wrote:
My, how quickly people forget here! In their willingness to wipe a previous president out of sight and out of mind, some people might have lost their minds! When Trump was POTUS, a similarly expensive infrastructure bill had passed the House with an added amount!

a.) Sadly, it's politics. The Democrats agreed on the amount of Trump's infrastructure bill, but disagreed on how to fund it, which is why they supposedly rejected it. There was "talk" Pelosi and Schumer were considering rejecting any infrastructure bill just to hurt Trump's economy/chances of reelection. Who knows . . .I expect the GOP to return the favor toward Biden's infrastructure bill(s) as pay back and partisan politics. In the "old days," people reached across the aisle, but that's sadly changed in recent years.

b.) Related to that last point, did you all know that the Senate filibuster has historically been used an average of ONCE a year. After Obama/Biden were elected, it was used an average of 80x/year throughout their entire terms in office. ...That's some obstruction!

c.) It's unclear whether or not infrastructure can be passed via reconciliation (bypassing filibusters), but there may be a case for categorizing it as part of "emergency" economic spending measures. This is the latest "Child & Families" bill being proposed: story: [www.cnbc.com]


@ wrote:
Biden will unveil the massive new package less than a month after the White House put forward a sweeping proposal to spend more than $2 trillion over eight years on infrastructure and other projects. Together, the plans comprise the Biden administration’s vision to overhaul the U.S. economy as the nation seeks to recover from, and look beyond, the coronavirus pandemic. . .

Here’s some of what the new plan calls for:

$225 billion toward high-quality childcare and ensuring families pay only a portion of their income toward childcare services, based on a sliding scale
$225 billion to create a national comprehensive paid family and medical leave program
$200 billion for free universal pre-school for all three- and four-year-olds, offered through a national partnership with states
$109 billion toward ensuring two years of free community college for all students
About $85 billion toward Pell Grants, and increasing the maximum award by about $1,400 for low-income students
A $62 billion grant program to increase college retention and completion rates
A $39 billion program that gives two years of subsidized tuition for students from families earning less than $125,000 enrolled in a four-year historically black college or university, tribal college or university, or minority-serving institution
$45 billion toward meeting child nutritional needs, including by expanding access to the summer EBT program
$200 billion to make permanent the $1.9 trillion Covid stimulus plan’s provision lowering health insurance premiums for those who buy coverage on their own
Extending through 2025, and making permanently fully refundable, the Child Tax Credit expansion that was included in the Covid relief bill
Making permanent the recent expansion of the Child and Dependent Care Tax Credit
Making permanent the Earned Income Tax Credit for childless workers

Paid for, in part, by reversing some of those Trump tax cuts for the ultra rich. Yes, please!

This is separate from the $1.9-2 trillion infrastructure bill, as noted.

@annelehman wrote:
Hello! What is the story on the PUA unemployment payments in the state of VA? TY, Night Owl at 3:25 am

Are you not getting them?

ARP extended PUA through September 2021 (with maximum duration of PUA benefits at 79 weeks and even up to 86 weeks in some high-unemployment states).
Reply
Like This
Shop-et-al 11k 7y April 29, 2021 12:35PM
The filibuster is neither good nor bad. It is merely one of many tools that can be used. It is unfortunate that the filibuster was needed on so many occasions recently. Why it was used is at least as important as that it was used. You say obstruction. I say, why would anyone have wanted to proceed with some of the concepts then/there?

All these things matter, and a continuity editor would clarify and explain such things to the masses. 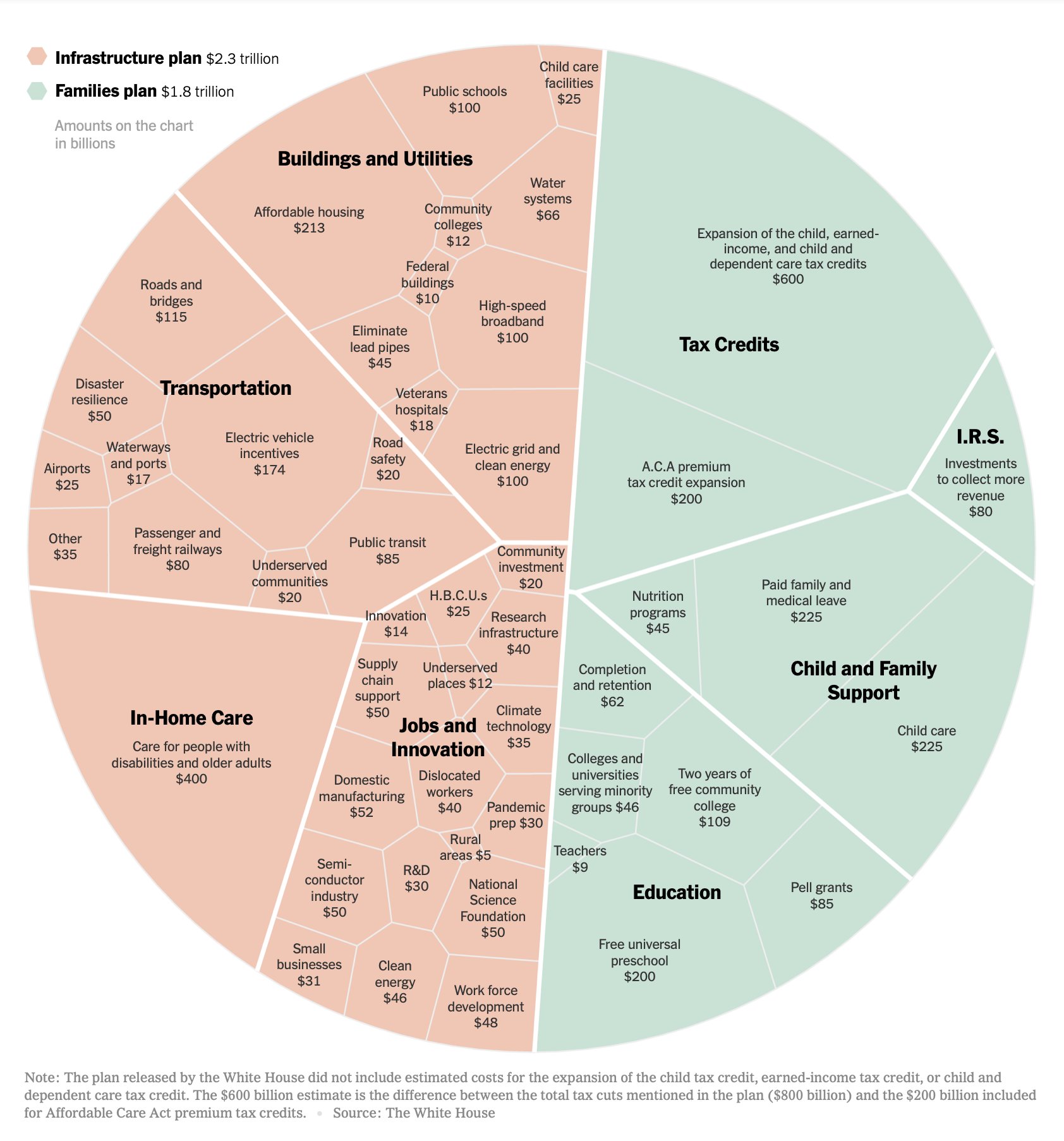 This is actually a fantastic visual!
Reply
Like This

Shop-et-al 11k 7y April 30, 2021 01:24PM
One NYT writer commented that not since FDR has a president made such sweeping changes. That stopped me in my tracks, and I began my own little review of US economic ups and downs.

_____
I’ve noticed that everyone who is for abortion has already been born. - Ronald Reagan
_____
Reply
Like This
Sorry, only registered users may post in this forum.